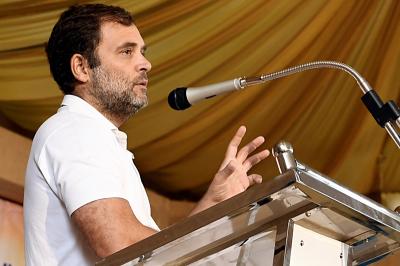 New Delhi: Congress leader Rahul Gandhi on Wednesday alleged that the Citizenship (Amendment) Bill is an attempt by the "Modi-Shah government" to ethnically cleanse the Northeast and a "criminal attack" on the region.

Protests have broken out in several parts of the Northeast over the Citizenship (Amendment) Bill which was passed in the Lok Sabha on Monday and will be placed in the Rajya Sabha on Wednesday.

Also Read: Rahul Gandhi to campaign in Jharkhand on Monday

"The CAB is an attempt by Modi-Shah government to ethnically cleanse the Northeast. It is a criminal attack on the Northeast, their way of life and the idea of India," Gandhi said in a tweet.

"I stand in solidarity with the people of the North East and am at their service," he said, tagging a media report on protests in the Northeast against the Bill.

Large parts of the Northeast on Tuesday simmered over protests by students' unions and Left-democratic organisations against the contentious Citizenship (Amendment) Bill.

Normal life was paralysed in Assam's Brahmaputra Valley during the shutdown, led by the All Assam Students' Union and the North East Students' Organisation(NESO).

The strike coincided with the bandh called by Left-leaning organisations, including the SFI, DYFI, AIDWA, AISF and AISA. Huge processions were taken out in different areas of Guwahati, with protesters raising slogans against the emotive legislation.

Agitators engaged in scuffle with security forces near the Secretariat and Assembly buildings in Assam when they were prevented from moving forward, police sources said.

On Tuesday, the former Congress chief had said that anyone who supported the bill was attempting to destroy the foundation of the country, a day after the bill was passed by the Lok Sabha with 311 members favouring it and 80 voting against it. He termed the bill an "attack on the Indian Constitution".