Bajaj’s iconic Chetak is back as electric scooter 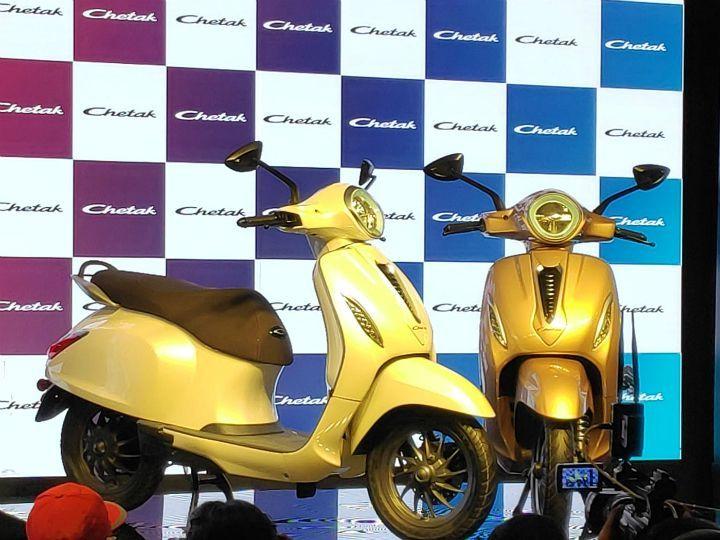 - It gets LED lighting, Bluetooth connectivity and a digital instrument cluster.

- Bajaj will launch the electric scooter by mid-November to early December.

- The Chetak’s electric avatar has a range of 95km in Eco mode and 85km in Sport mode.

- It will be sold via Bajaj's Pro-Biking dealership network.

The EV space in India has seen a surge in the number of manufacturers coming in with their electric two-wheelers. Currently, no mainstream big bike maker has dipped its toes in this segment, which is still in its nascent stage. Now though, Bajaj has entered into the EV segment with a legendary name - Chetak. Yes, the humble Chetak has gone electric! Bajaj will officially launch the scooter by mid-November to early December, with deliveries slated for January next year. The bike maker has also said that it’s currently producing the e-Chetak in limited numbers, however, it will ramp up production in the coming months.

The electric Chetak won’t be the only electric two-wheeler that we are going to see from Bajaj as the Pune-based bike could launch an electric motorcycle as well as an electric version of the Qute quadricycle in the near future.

In the past couple of months, we have already seen several spy shots of the Chetak electric scooter. However, the camouflage did no justice to the scooter’s gorgeous styling. The Chetak e-scooter sports a retro style, just like the Vespa. To take on the several e-scooters that are out there, Bajaj has equipped the all-new Chetak with a generous amount of equipment. It gets all-around LED lights, a digital instrument cluster, two ride modes (Eco and Sport), a reverse mode and Bluetooth connectivity. As of now, the company hasn’t revealed the official specs, but it has mentioned that the e-scooter is powered by a 4kW motor and it has a real-world range of 95km in Eco mode and 85km in Sport mode.

Just like Ather and Revolt, even Bajaj will launch the electric Chetak in a phased manner, with Pune and Bengaluru people being the first ones to get their hands on the scooter. Launching an electric two-wheeler in select cities makes sense for manufacturers as these cities are better equipped with charging infrastructure.

Bajaj hasn’t revealed the price yet, but the company has said that it will launch the electric Chetak at a fairly aggressive price tag. We expect the new-age Chetak to be priced around Rs 1 lakh, which will make it around Rs 10,000 to Rs 12,000 more affordable than the Ather 450.

Bajaj Auto has gained first-mover advantage being the first established Indian two-wheel maker to go electric. Will this give impetus to companies such as Hero MotoCorp and TVS to follow Bajaj’s footsteps? Will electric start-ups sit up and take notice of a two-wheel giant entering the niche space? Will the Bajaj Chetak give the Ather 450 a good run for its money? Only time will tell. We will be riding the Chetak electric soon, so stay tuned to our first ride report.