Dinesh Raheja Column: Dimple Kapadia has the rare ability to laugh at herself

Dimple Kapadia, who will celebrate her birthday a few days from now on June 8, couldn’t have asked for a better birthday gift.
01:29 PM Jun 01, 2019 | Dinesh Raheja 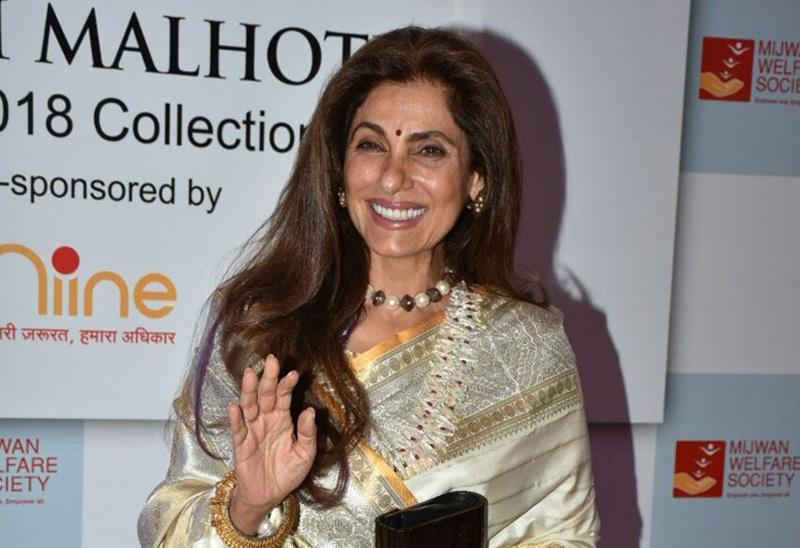 Dimple Kapadia, who will celebrate her birthday a few days from now on June 8, couldn’t have asked for a better birthday gift — the 62-year-old actress has been signed by Hollywood biggie, director Christopher Nolan for his upcoming film Tenet featuring Aaron Taylor-Johnson, Kenneth Branagh and Michael Caine. It’s a heartening affirmation of her talent.

Launched 46 years ago by showman Raj Kapoor with the blockbuster Bobby (1973), re-launched by Ramesh ‘Sholay’ Sippy in Saagar (1985), Dimple has had a chequered and interesting career with long self-imposed sabbaticals. My association with her is now more than 30 years old, and I have always thought her unique…Not just because of her beauty but because of her resilience, and her rare ability to laugh at herself.

My first offscreen glimpse of Dimple was while I was on my honeymoon in Pahalgam in 1983. She was staying in the same hotel as me along with her sister and constant companion, Simple, and the unit of Nasir Hussain’s Manzil Manzil. I got a mere glimpse of her as she sat in the car and whizzed away to the location. I had been recently recruited by Cine Blitz but since I was on a holiday I didn’t approach her. A year later, I was formally introduced to her by veteran publicist Gopal Panday on the sets of Zakhmi Sher in Chennai and was dazzled by her persona. She was beautiful! When I interviewed her the next day, the unit hand brought her Chinese food and served me the famous South Indian tiffin. Dimple politely told him, “Either Chinese for both or tiffin for both.” The unit hand took the cue and served me Chinese food too.

A couple of days after my interview with her appeared in the magazine, I bumped into her at Filmistan Studios. She waved out to me and flashed her characteristic broad gummy grin. When I went across, she said, “Thanks, I loved your piece, especially the bit about how I was chewing gum like a nervous cow chewing cud.” She added, “All others wrote about how confident I was; you are the only one who observed that I was nervous as hell.” We hit it off thereafter and I did half-a-dozen interviews with her…some of which were canned by her at the last minute as she felt she had spoken a little too candidly.

When I took a shot at being a photo journalist in the late ’80s after I had invested in a fancy Nikon camera, I trained my lenses on the gorgeous auburn-haired Dimple Kapadia whenever I could. I shot innumerable photographs of her on the outdoor locations of Ram Lakhan in Ooty and some stunning close ups of her at Hotel Sun n Sand while she was waiting for Mukul Anand to set up the shot for Insaaf. Insaaf marked the return of the handsome Vinod Khanna after a long stint at the Rajneesh ashram and was Dimple’s first post-comeback hit.

Dimple was my favourite muse. Not only was she a photographer’s dream but she also had a crackling sense of humour and could keep you entertained with endless stream of witticisms and quotes. She could take liberties with me and she did! She had nicknamed me Mr Walrus because she felt I had a thick moustache that drooped on both sides, with the right side of the moustache being longer than the left.

Her candour is legendary. I remember motoring down to attend the grand mahurat of Subhash Ghai’s Ram Lakhan at Fariyas Hotel, Lonavala. Dimple saw me from afar and hollered, “Where are your spectacles?” Since I am not accustomed to being the cynosure of all eyes, I didn’t shout back, but resorted to gesturing that I was wearing lenses. She shot back, “You are wearing contact lenses? At least you should have done something about your dark circles before that!” Guest Poonam Sinha (Shatru’s wife and Ghai’s rakhi sister), who was standing by my side and making casual conversation, was most entertained.

After the release of Ram Lakhan, Dimple was asked by a reporter for a quote on why she had done a role which didn’t have much substance. Dimple asked me to think of something witty. I joked, “Tell the magazine that you got paid six lakhs to throw your hair in the film.” We laughed; and I forgot about it. The next month, however, when I met her, she told me to pick up the magazine. She guffawed, “The quote ‘I was paid six lakhs to throw my hair’ has made it to the cover!”