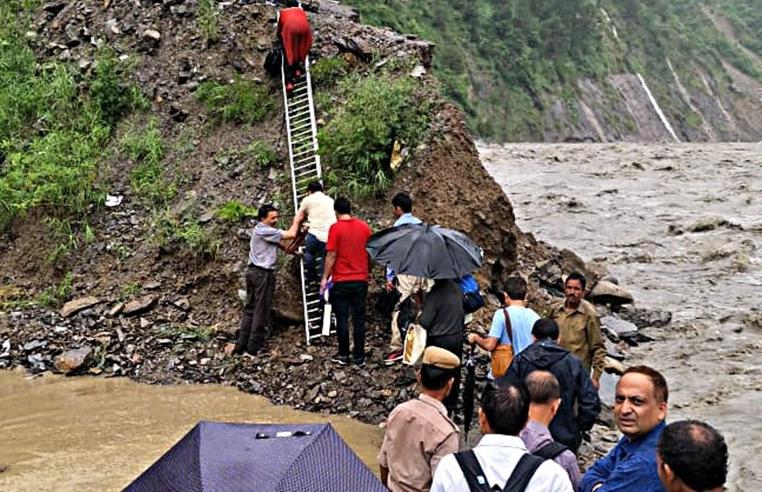 Shimla: The local Indian Meteorological Department (IMD) on Monday said that Himachal Pradesh recorded highest ever rainfall in last 24 hours by breaking the record of last 70 years. According to the IMD, rains across different places in the state will continue for the next 24 hours.

"Before this, extremely heavy rains were reported in August 2011 when Himachal Pradesh had recorded 74 mm of rains. But heavy downpour has broken the record the year. Naina Devi recorded the highest rainfall at 360 mm and Shimla recorded 153 mm of rainfall," he added.

According to IMD, some districts have also received snowfall in the state. Lahaul and Spiti district and Keylong have recorded 3mm snowfall till now. Advisories regarding landslides and uprooting of trees have been issued in the region. According to the local weather department, the weather will start clearing after 24 hours.

Meanwhile, many villages have been cut off in Indri District, Haryana and several farmlands have been inundated in the region after, around 8, 28,000 cusecs of water was released from Hathini Kund barrage.

"Rescue forces and authorities are working in full swing in order to provide relief to the affected people in the region. We have airlifted the affected people from Tapu village in Indri District at 2:00 am last night. The water level has started reducing in many affected areas," said Chief Minister Manohar Lal Khattar.

The Yamuna level started rising near the catchment area on Sunday after water was released from Hathni Kund Barrage in Yamuna Nagar.

Irrigation Department official Haridev Kamboj told ANI, "Till 3 pm, 7, 60,466 cusec of water was released from the barrage, which could affect low-lying areas in Delhi in the next 48 hours. The release of water began at 4 am. The administration has sounded a high alert in all the nearby areas of Yamuna Nagar."

He said, "Due to heavy rainfall and a cloudburst in Uttarakhand, the water level in the river is increasing. Officials are monitoring the situation." A local resident told ANI, "Water from the river has started entering irrigation fields. If the downpour continues, then we might witness flooding in the state. The government should take immediate steps."