If it’s Ramzan, it’s the feast that follows the fast which grabs the Mumbaikar’s fancy. And, what better way to feast other than in style and at Mohammad Ali Road near Minara Masjid.
01:22 PM May 25, 2019 | Gajanan Khergamker 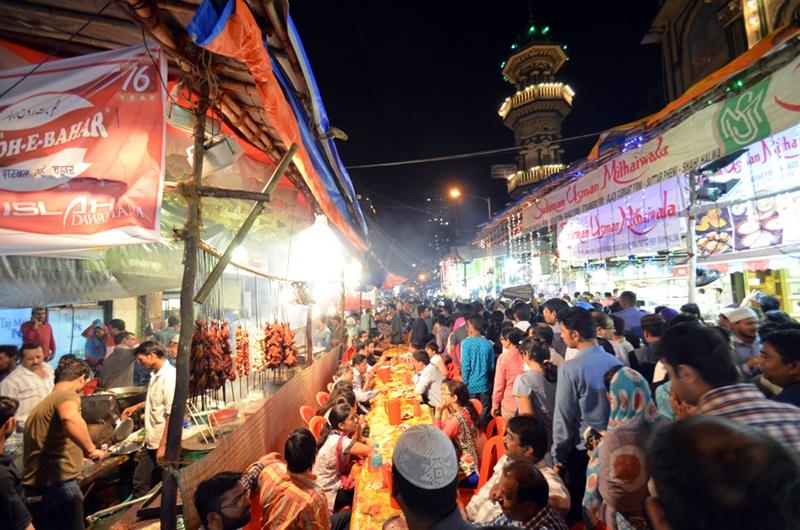 If it’s Ramzan, it’s the feast that follows the fast which grabs the Mumbaikar’s fancy. And, what better way to feast other than in style and at Mohammad Ali Road near Minara Masjid. There is no way a Mumbaikar would not know about the zone’s Khau Galli where thousands throng to soak in the festivities, learn about the grace of locals and grab a treat of a lifetime with street food that’s symbolic of the zone almost like a patented form of work. It isn’t without reason that Versova-based Tanaaz Merchant shifts to her friend’s home at Bhendi Bazaar, without fail, for a week during Ramzan. “The street food at Khau Galli near Minara Masjid is just so good that it makes the fasting well worth it. It sure offers something to look forward to,” she describes.

So, after battling the bumper-to-bumper traffic during trips from Versova almost every second day during Ramzans in earlier years and having to “cajole” her father to transport her to the zone in South Mumbai and back home late in the nights, Tanaaz opted for this all-weather-solution. “I decided to shift to my friend’s home at Bhendi Bazaar, for a week, during Ramzan and commute to the suburbs for work through the days then, simply so I can binge peacefully with my friends during the nights at Mohammad Ali Road. That way, my parents too aren’t worried about me commuting back home late in the nights,” she says.

Against the backdrop of the beautifully-lit Minara Masjid, the settings are just right for a foodie. The perfect time to visit the Khau Galli here is around 7.30 pm when everyone breaks their fast and the feast begins. Within minutes, Khau Galli has a sea of feasting revellers flowing into the zone, with some stopping by to taste a falooda or two or grab a plate of kebabs swiftly before moving on.

Among the legendary delicacies here is the Mawa Jalebis, also known as Khoya Jalebis and usually unmissable. And, if it’s Mawa Jalebis, it will have to be the Burhanpur Mawa Jalebis displayed proudly in a distinct heap below a signage that reads ‘King of Mawa Jalebi’. Try tasting it and you will realise you simply can’t disagree. They make them at breakneck speed and instead of the usual crisp jalebis you’ve had all your life, these made with mawa, look like the regular ones yet taste like Gulab Jamuns. Burning one’s tongue while eating is a regular occurrence here as you jostle with surging customers while trying to quickly gorge on jalebis that taste simply out of this world.

It’s only here, at Mohammad Ali Road’s Khau Galli, and during Ramzan, that you will find a queue of kebab lovers lining up religiously from 6 pm for the Kebab Counter at Chinese and Grill that opens even more than two hours later. Don’t even try asking the staff about the choices available or take long to order. They will snap and rightly so. The crowds here are crazily huge and patrons are ‘expected to know’ what to order. The Fried Chicken here is a favourite and delivered rather differently. Long chicken strips are wrapped in noodles before being fried and served ‘golden’. Apart from the regular meat delicacies in Khau Galli, is Noorani Milk Centre’s Masala Milk which sell a range of sweets and drinks. The best of the lot, the Masala Doodh in small glass bottles, is served chilled and flavoured with a special masala along with kesar and turmeric. It’s a big favourite with regulars who swear by it and usually buy a dozen odd to take back home.

Among the stories associated with Khau Galli is that one about Sanjay Dutt who “shared a special recipe” with the owners of Noor Mohammadi Hotel years ago. The hotel serves the dish exactly like Sanjay Dutt would like it, as detailed in his own recipe. So, the dish, a chicken leg served in a curry consumed with hot rotis, is actually named after the Hindi film industry’s original bad boy, Sanju Baba Chicken sold at the spot located at Abdul Hakim Noor Mohammadi Chowk. And then, after the regular gorging that is closely associated with a visit to this zone, this time of the year, it would be criminal to miss a trip to Taj Ice-Cream Sancha Handmade. The Taj ice-cream shop is more than 125 years old and doles out the ‘bestest’ of handmade ice-creams that taste like rich smoothies long, long before the arrival of multiplexes with their food courts selling machine-made versions.

A trip to the zone is guaranteed to make you a fan for life. And the feast after a fast couldn’t be better unless it’s at Mohammad Ali Road’s Khau Galli. Tanaaz’s decision to shift to a place close to Khau Galli during this period was a wise one. “That way, sometimes, even I land up staying back with my friends late in the nights at Khau Galli without having to worry about her reaching home, soon and safe,” quips her entrepreneur father Firoz Merchant.