A recent survey found that people today buy and discard clothes faster than ever. In fact, the implications of this are so bad that the fashion industry could be listed alongside the oil industry as one of the five most polluting industries in the world!
01:10 PM Jun 01, 2019 | Shillpi A Singh 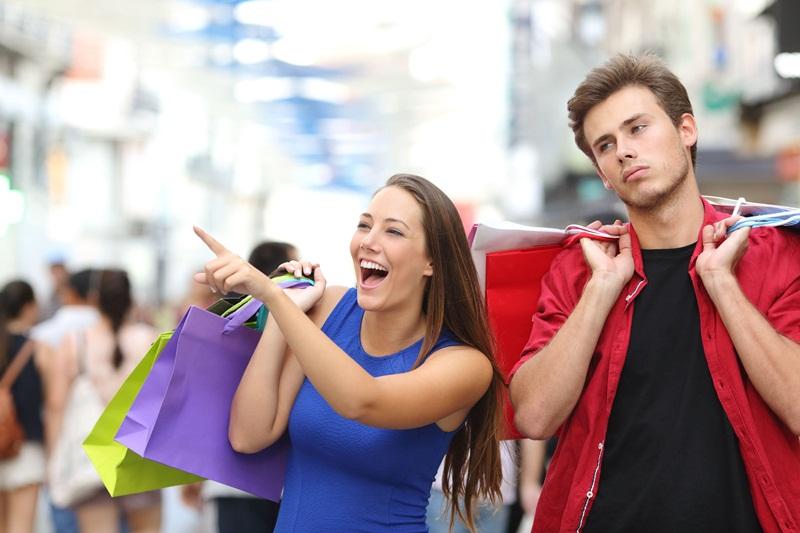 Shillpi A Singh examines the trend that apparently strikes more women than men.

A recent survey found that people today buy and discard clothes faster than ever. In fact, the implications of this are so bad that the fashion industry could be listed alongside the oil industry as one of the five most polluting industries in the world! For most, this news willy-nilly throws up images of a shopaholic, a woman in her thirties indulging off her husband’s credit card.

But that’s not so. “The trope of women being shopping maniacs is largely a myth developed and cumulated over time by recurrent stereotypes perpetuated by popular culture. In reality, both men and women are likely to be hit by the shopaholic bug — their motivations and indulgences might be different,” notes Dr Prakriti Poddar, counsellor and an expert in mental health, and the managing trustee of Poddar Foundation and director, Poddar Wellness Ltd.

All in the mind

Giving a rundown of this addiction, Dr Sameer Malhotra, director, Department of Mental Health and Behavioural Sciences, Max Hospital-Saket, says, “Retail therapy refers to the practice of shopping to make oneself feel more cheerful. However, one needs to be aware that the benefits are relatively short lasting and it comes with a cost. Compulsive buying may make one feel relaxed for a while (having released the urge) and biologically reflects a kick through dopaminergic reward pathway, similar to being dependent on a substance. It is also reflective of an obsessive urge reflecting low levels of serotonin in the brain.”

There’s a reason for this indulgence. Malhotra lists four factors contributing to this habit — personality profile of the individual (one’s with impulse decontrol), biological (low serotonin in the brain), contextual (stress), and marketing methods. Shopping, much like other addictions, is also perceived to fill some voids – be it boredom, anxiety, a feeling of social inadequacy or low self-esteem. “It is a kind of compulsive behaviour that may have roots in other mental problems. Women are more prone to anxiety and depression and may be likely to exhibit greater compulsive behaviour when it comes to shopping. However, there is no conclusive data or statistics to prove this,” says Dr Poddar.

Interestingly, a study published in the American Journal of Psychiatry in 2006 found that 6% of women and 5.8% of men displayed compulsive shopping behaviour, suggesting a nearly similar rate of affliction. Busting the myth around women shopaholics, Dr Poddar says, “Women’s indulgences tend to get publicised more than men — one of the reasons behind this is the fact that fewer women are financially independent and tend to spend the money earned by their husbands, earning the reputation of being shopaholics. Another interesting angle to this subject is the fact that women shop not just for themselves but the entire families. A woman will be buying for her children, husband, parents as well as in-laws, in addition to herself. In case there is a wedding in the family or any celebration, gifts are more likely to be bought by the women. Women are also more likely to be taking care of the household, its interiors, its aesthetics as well as the groceries. Men, on the other hand, tend to buy the more expensive things versus women who tend to go for the best deal.”

Why shop till you drop?

Dr Malhotra who has come across patients with compulsive shopping adds that excessive shopping reflects impulse decontrol. Shopping till you drop is a mood lifter. “And it is true. Studies have observed people getting happier when they shop. However, a good number of people tend to avoid stresses by shopping only to be later flooded by the same onslaught of sadness. Shopping to distract oneself is not a favourable strategy, and can prove harmful in the long run,” says Carlton D’souza, counselling psychologist, Department of Mental Health and Behavioural Sciences, SL Raheja Fortis Hospital, Mumbai.

“Any addictive habit has a ‘feel good’ aspect associated with it. The individual shops to seek happiness or to avoid stresses, and finds the experience rewarding. The association of this behaviour with happiness leads to the formation of a vicious circle, in some cases resulting in compulsive buying,” adds D’souza.

The phenomenon of compulsive or impulsive shopping as a problematic behaviour in isolation is a rarity, especially in Indian context. Akanksha Pandey, consultant clinical psychologist, Fortis Hospital, Bengaluru, says, “They are often presented to a mental health professional as one of the many symptoms. This is also due to various factors like lack of awareness, the general stigma associated with psychological illnesses or limited mental health resources. It is not uncommon to witness compulsive or impulsive shopping as a part of other clinical conditions like anxiety disorder, mood disorder or manic episode, obsessive-compulsive disorder, etc. Like any addiction, compulsive buyers experience a rush when making a purchase. Usually, they try to avert underlying distress or seek a momentary euphoria as a response to feelings of depression, anger, anxiety, aloofness or low self-esteem.”

Retail therapy fulfils a momentary need for perfectionism, immediate gratification of need, venting out suppressed anger or for some may work as a distraction technique or have a sense of power or control over the situation. “The most common defence mechanisms found in such people is denial or intellectualisation,” Pandey adds.

D’souza quips, “As far as common advice goes, accepting that there is a problem is a first and most important step in dealing with addiction. It may be of great help if first, and foremost, one could visit a psychotherapist because each case has unique characteristics that will not necessarily be addressed by common advice given on the subject.” Pandey adds that professional help might come in handy if the cause of such behaviours is an underlying psychiatric condition. But the piece of advice for both compulsive and impulsive buyers is to introspect the cause of indulgence and analyse if it helps their cause in the long run. According to Malhotra, the checks that can balance a shopping addiction lies in making a list of things that one really wants, and try revisiting the idea of buying it at a later date. “One must avoid the rush to buy too many things at a time, restrict access to plastic money, set a limit to daily expenditure, keep the close family and friends informed, and spend time in cleaning cupboards and checking/organising/ using through mixing and matching things that one already has,” concludes Malhotra.

We haven’t been able to conclude that women shop more than men, so it is a gender neutral issue. What has been found is that women tend to enjoy shopping more than men. Shopaholic is a term almost equivalent to impulse control disorder like alcoholism, or any other addictions. It surely warrants treatment if one is doing it out of guilt or depression or stress or anxiety.

Maha Shivratri 2020: How to do download festival themed WhatsApp stickers

Maha Shivratri 2020: Messages and GIFS to send over WhatsApp and SMS

Maha Shivratri 2020: When Lord Shiva turned himself into a woman to watch Lord Krishna's 'raas-leela'